An Interview with Aron Johnston 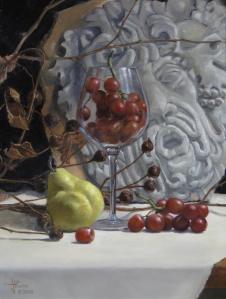 Aron Johnston is a gifted painter who has earned a substantial following over the last several years through his intricate look at the finer details of life. Aron draws his viewers into another place altogether by blending oils to create a dark base. This allows his subjects to sometimes jump off the page and directly into your soul, or dwindle in what seems like the background of the business of the room and wait for you.

Take a moment to get to know Aron and then join us at the Artist Reception where his work is featured in unison with colleague and friend, Annie Minicuci, this Saturday (September 19, 2015) from 6 to 9pm.

AJ: Because I suck at everything else.

2F: What do you consider your best working conditions? 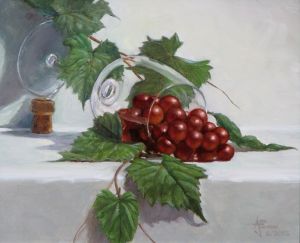 AJ: I work best when I can focus the entirety of my being on a single piece of art and wall off any and all distractions the world might (and invariably does) throw at me. This allows me to really get into an image, to live within it, and really grasp the ideas and forms that moved me to paint the image in the first place. When I can really invest myself mentally and physically in a painting it becomes an extremely meditative experience in which the rest of the world and all of its troubles simply melt away.

AJ: I was born in Los Angeles in 1976 and moved to a small rural community outside of Eugene, Oregon when I was four. Growing up in the coastal foothills of Oregon gave me a deep appreciation for natural beauty, an appreciation that has significantly shaped the way I look at the world. After high school, I followed in the family tradition of working in construction and spent fifteen years as an electrician and project manager. Seeing how unhappy I was working in the management field, my wife suggested that I make a change. I started painting and truly studying art in 2010.

2F: How has your practice changed over time?

AJ: The artwork I create has changed drastically over time. I began working strictly from imagination in black and white, using only graphite, charcoal, or ink. I was heavily influenced as a kid by comic books and initially wanted to work in that field. It wasn’t until 2010 that I took my first painting class and was introduced, or forced rather, to use color. I became interested in Surrealism, then Imaginative Realism. My work became focused on the relationship between natural and man-made environments – how the world’s fauna adapt, or not, to an environment built with only human needs in mind. After becoming dissatisfied with my ability to render objects with the desired level of clarity, I turned towards the still life as a skill building exercise and soon became fascinated by the objects I was painting. It made me realize that the reason I became attracted to a subject was out of a deep feeling of empathy towards it; the environmentally based artwork came from a sense of injustice and an empathetic response to the life forms we share our spaces with, the still life paintings that I was making came from a sense of empathy towards objects that had been cast off, either by life itself or by a society that no longer valued them.

2F: So what art do you most identify with? 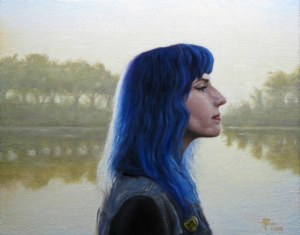 AJ: Personally I have always identified with Figurative Realism from any era – from Hellenistic Greek sculpture to the contemporary Figurative revival that we are seeing today. I believe that the human figure is the most emotive and relatable artistic subject out there. Everyone can relate to the human figure and it is hard not to have a response on some level to a beautifully rendered figurative work. Another reason that this genre appeals so much to me is that it requires an extremely high degree of technical skill and serves as an eventual target in my own artistic practice. Several of my favorites are John William Waterhouse, William-Adolphe Bouguereau, Abbot Handerson Thayer, Julio Reyes, Roberto Ferri, Brad Kunkle, Colleen Barry, Rob Liberace, etc. I could go on forever…