Painter Fritz VonderHeiden known for his cityscapes of Harrisburg 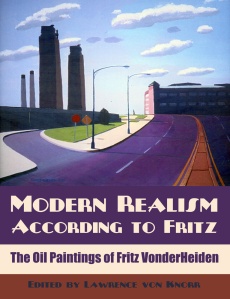 About the Book:
No one has painted urban Harrisburg as often as Fritz VonderHeiden (b. 1934). His style, developed over many decades, calls to mind Edward Hopper, but in a reductionist, minimalist way. His best urban works feel sterile and monolithic, emphasizing the geometry of road, architecture and the natural world in a compelling composition of curves, color, and structure. They exemplify the energy of the 20th Century, harkening back with Art Deco elements.

Fritz did not always paint this way. His earlier works – and some of his award-winning paintings – are more detailed, calling to mind Winslow Homer and John Singer Sargent. His range of subjects is also varied, from the urban settings mentioned to country landscapes, lighthouses, portraits, still lifes and even surreal imaginings.

This book contains images of 127 of Fritz’s paintings in all of his categories: Scenes of Harrisburg, Scenes of the Greater Harrisburg Area, Portraits, Groups, and Figures, Landscapes and Lighthouses, and Still Lifes and Wildlife. All help celebrate the long career of this prolific painter, capturing his mastery of 20th Century Modern Realism.

About the Editor:
Lawrence von Knorr is a native of Pennsylvania who is one of the pioneers in “Digital Impressionism” or “Photo Impressionism”, utilizing computer software to enhance photography to produce painterly creations. His work includes landscapes, architectural, portrait and still-life subjects.

Lawrence received a 35mm camera as a gift at age 13, and has been photographing ever since. Professionally, he has worked in the information systems field, providing numerous opportunities to travel extensively. In recent years, the love of photography and experience in computer software merged into an interest in digital fine art.

EXHIBITION AND BOOK SIGNING:
An exhibition of Fritz VonderHeiden’s work is being held at the 2nd Floor Gallery at 105 S Market St, Mechanicsburg, PA, 17055, for the month of October. A book signing will be held there on Saturday October 18, 2014, from 6 PM to 9 PM. Please contact the gallery for more information: (717) 697-0502.